Posted on December 7, 2013 by eileendandashi

Title: Murder in Thrall An Acton and Doyle Scotland Yard 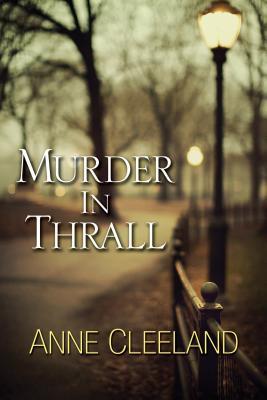 About the Author: With a degree in English and law, Anne Cleeland writes historical fiction with settings in the Regency period and contemporary mystery series set in New Scotland Yard.  Murder in Thrall is the first of a new series for her.  She has authored two other books: Tainted Angels and Daughter of the God-King, both published in 2013.

About the Story: Two of Scotland Yard’s detectives, Chief Inspector Acton and Detective Constable Kathleen Doyle have been working together for three months solving any crime easily.  Doyle, an Irish girl of impoverished background is taken under Acton’s wing for more reasons than are at first apparent.  She has a unique ability in reading the truth behind words.  She can easily tell when someone is not telling the truth.  Acton is a British lord and is known for his uncanny ability to solve high-profile homicides.  Between the two of them they are an excellent team.

Acton is physically drawn to Doyle and is unable to keep the relationship on a professional level.  Doyle, who self-educates herself by learning new vocabulary words is trying to understand why he wants to move the relationship to a new level.  He could have any woman he desired.

A particular series of murders takes place, first a racehorse trainer gets murdered and shortly follows his girlfriend and other murders continue.  Acton and Doyle work to solve the crimes.  Are they done by the same murderer?  What is the motive of the crimes?

My Thoughts:  The blossoming relationship between Acton and Doyle was very appealing and strange, which only made me, as a reader, need to keep on reading.  The reader isn’t always privy to every detail when it happens which only makes the mystery more exciting.

I loved the simplicity and directness of Doyle.  She is a pleasure to get to know.  I don’t want to write any spoilers, because I don’t want to spoil the story for you.  I can say that it was highly entertaining, well-written and well-paced, with good character development.  Close to the end of the book, you simply cannot put it down.  So make sure that you plan on losing sleep or start the ending early on in the evening.  I look eagerly forward to the next book in her series.

I am a lover of books, both reading and writing. 2018 marks the beginning of my own journey from writer to published author. This blog will showcase various authors' thoughts on the elements of novel crafting, and my attempts to find my voice in writing. While journaling this journey, I hope to encourage others to follow their dreams. Book reviews continue as I have the last four years, only making time for my new pursuits.
View all posts by eileendandashi →
This entry was posted in Book Reviews and tagged Anne Cleeland, Book Review, Kensington Books, Murder in Thrall, Scotland Yard. Bookmark the permalink.